The client saw my Root Domain quilt and decided I could do what she had in mind for her home’s back entrance. She wanted a very large wall hanging to cover the door and windows in cold weather, but also wanted the front of the hanging to portray the prairie landscape in the context of her own view.

(Her yard is a certified wildlife habitat and has native prairie grasses.) She asked for the landscape to look realistic, feel ‘open’, be late afternoon in the summertime, and be full of life.

Below is the rough sketch (or bozzetto) of the concept. Many animals (mammals, birds, insects, reptiles) will be added, each telling their story. The large trees on the sides, and foliage at the top, are meant to give the feel of an archway. The ground is cut away primarily to show the extensive root systems of prairie grasses. 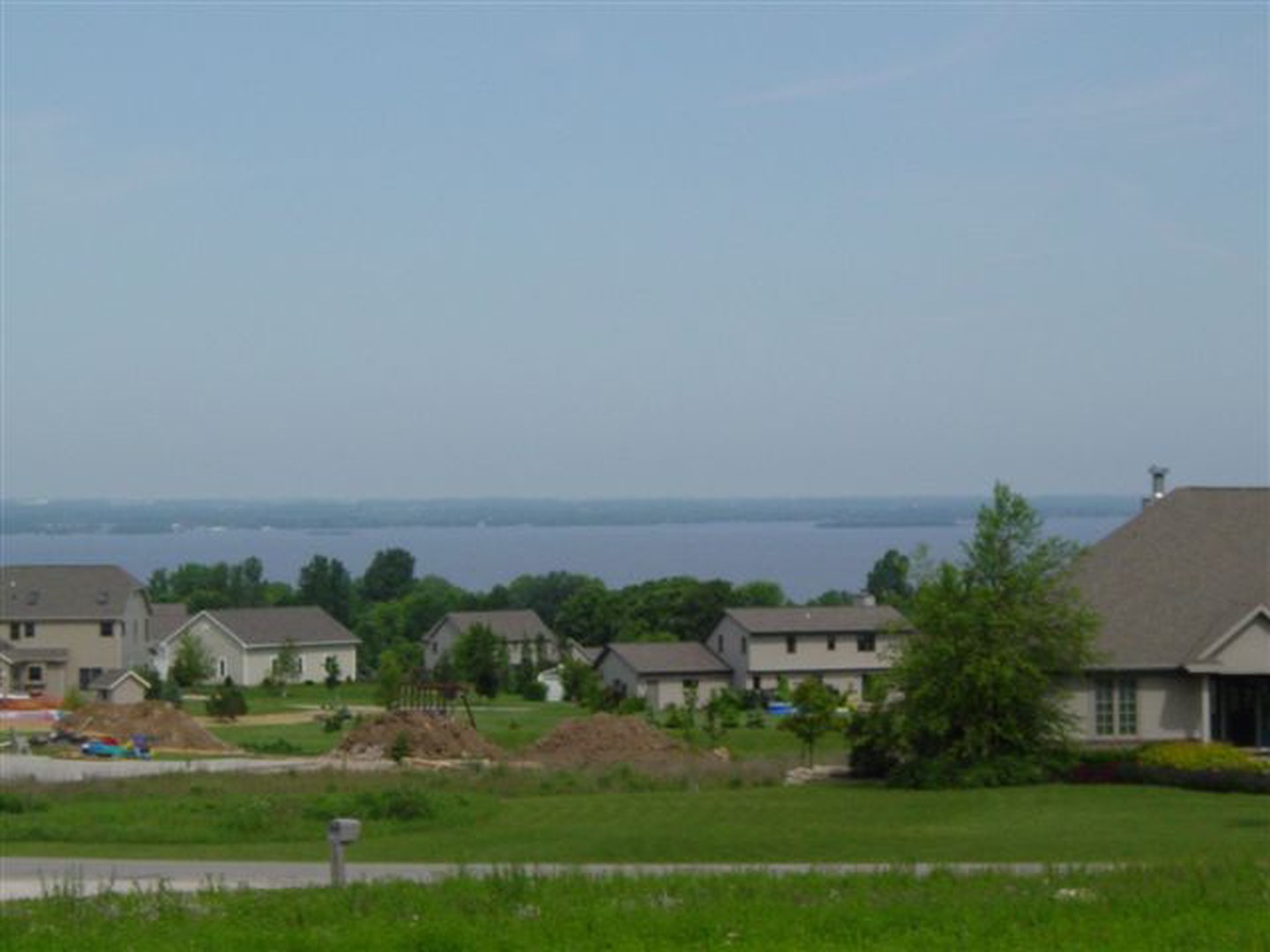 The view from her backyard, overlooking the largest lake in Wisconsin

The wall hanging as of December 1, pinned up to my design wall. The fabrics toward the bottom are not that dark, but are brown and reds. The whole thing is a bit larger than the finished size. The sky is painted; water is painted but will have thread lines added for reflections and waves; distant and midground trees essentially finished but shadows yet to be added beneath them; bark on large side trees essentially finished but leaves missing and trunks just pinned on to background. Foreground and belowground are pinned in place but not sewn. One animal finished (chipmunk, which will be hiding from a fox). All grasses and flowers yet to be added. And of course there will be quilting too. I am working on the animals now, which will be made from a variety of materials and techniques.

Some details of the work in progress:

Trees are all fabric and thread.

Sky is all fabric paint.

Most of the mammals are at least started. They are primarily made from thread stitched to a base fabric. The chipmunk and badger are reverse-appliqued into soil fabrics; ‘roots’ are yarns hanging into the holes. 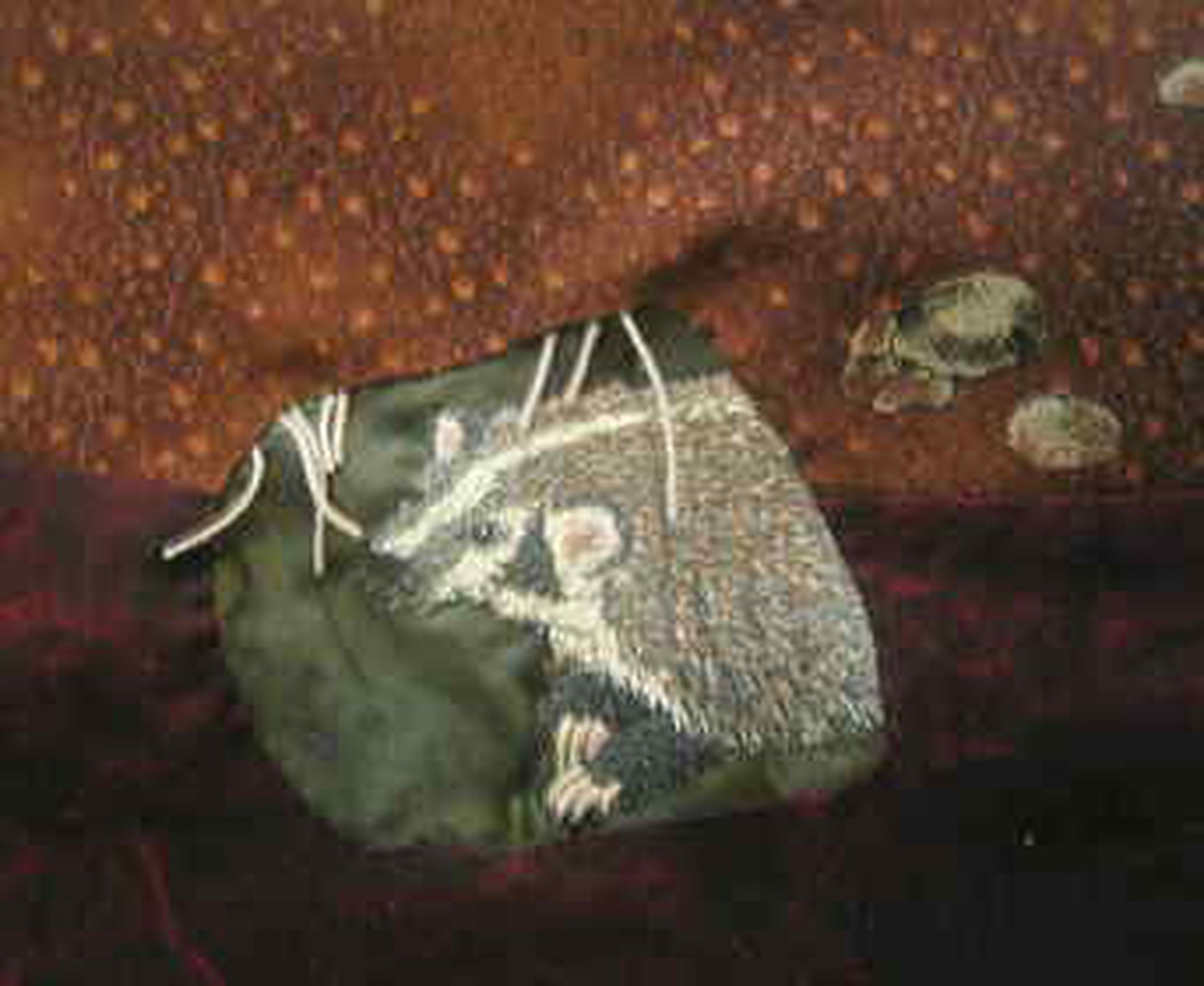 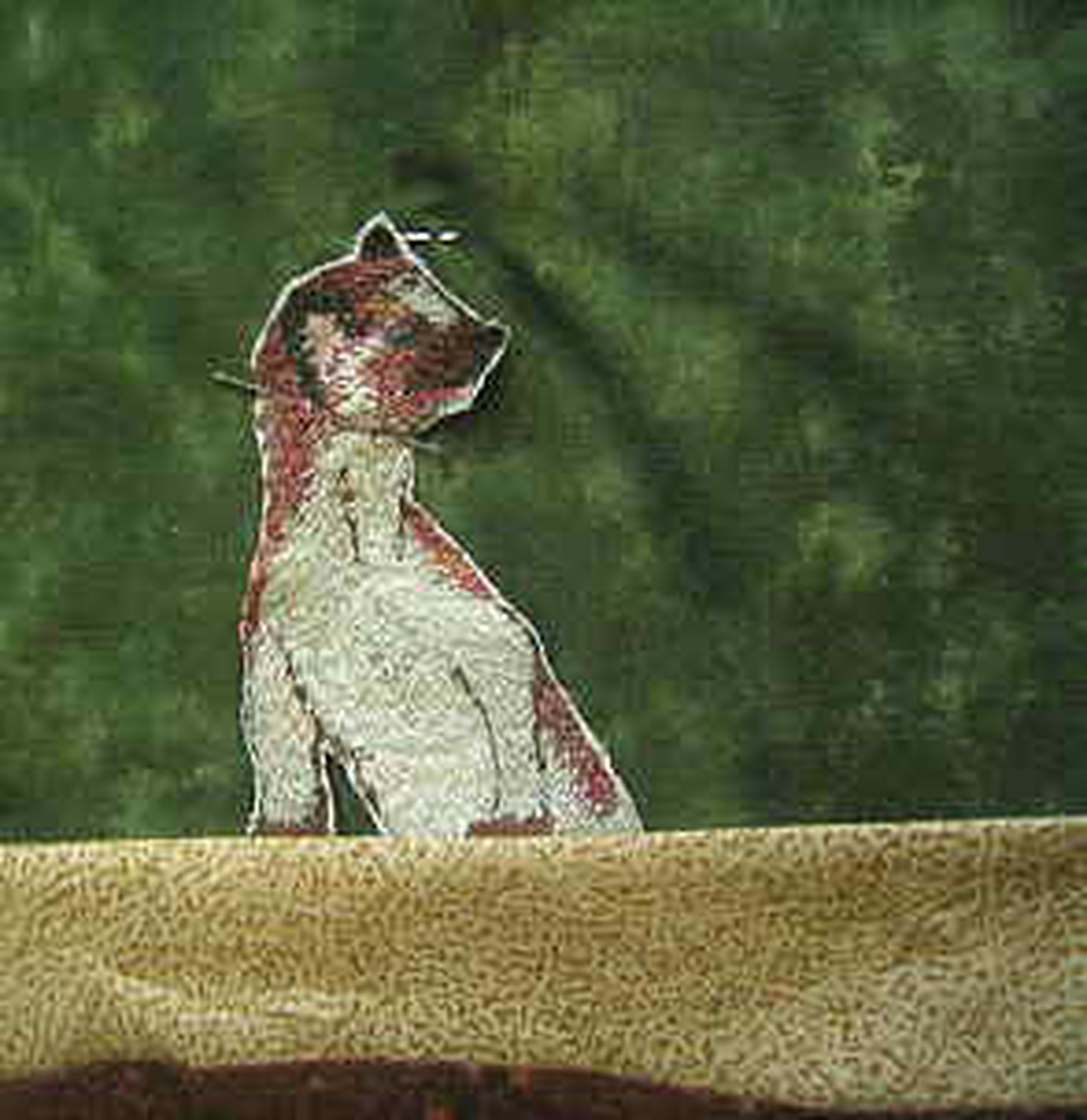 The fox, long-tailed weasel, cottontails, and squirrel are nearly finished and just pinned up in these images. 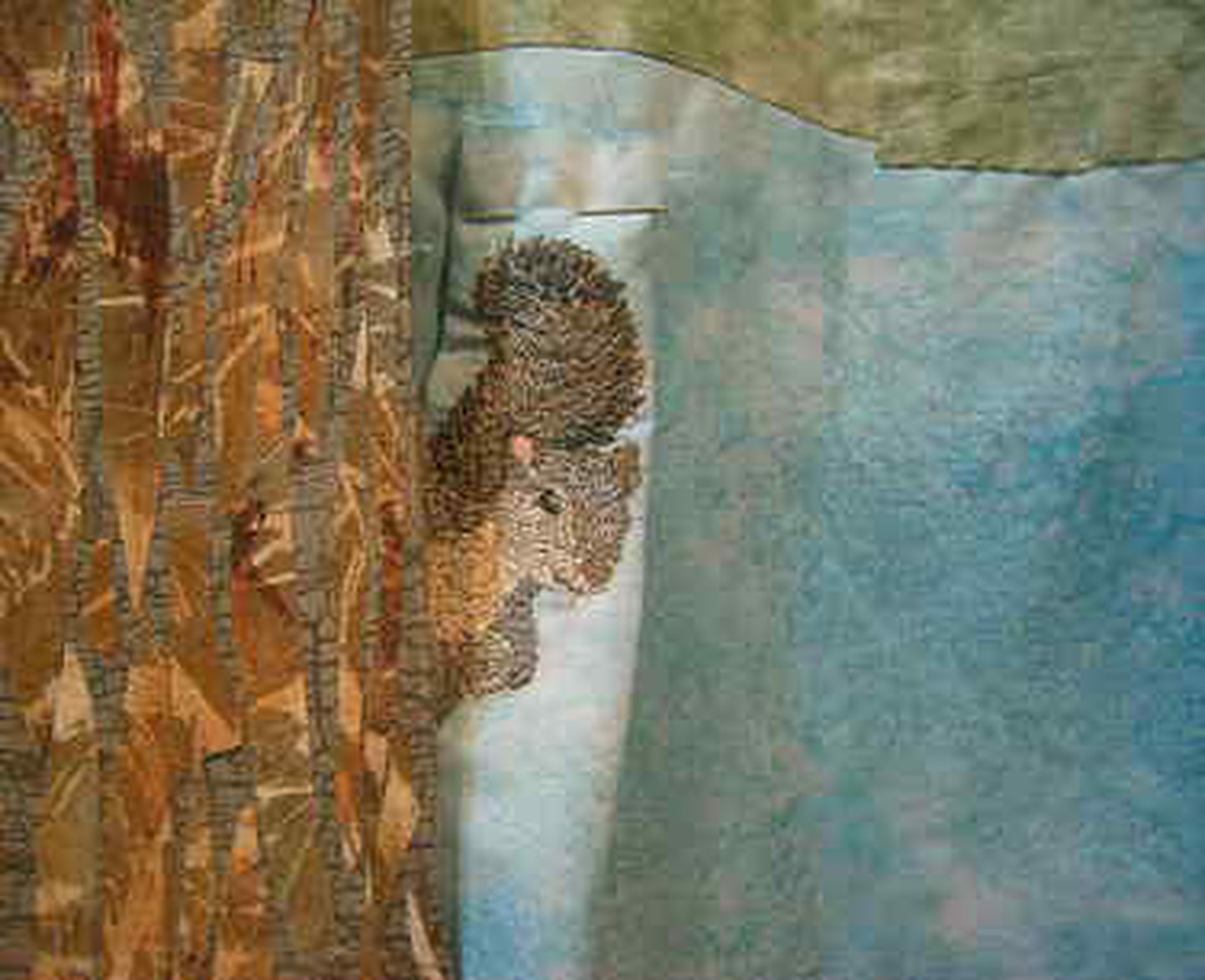 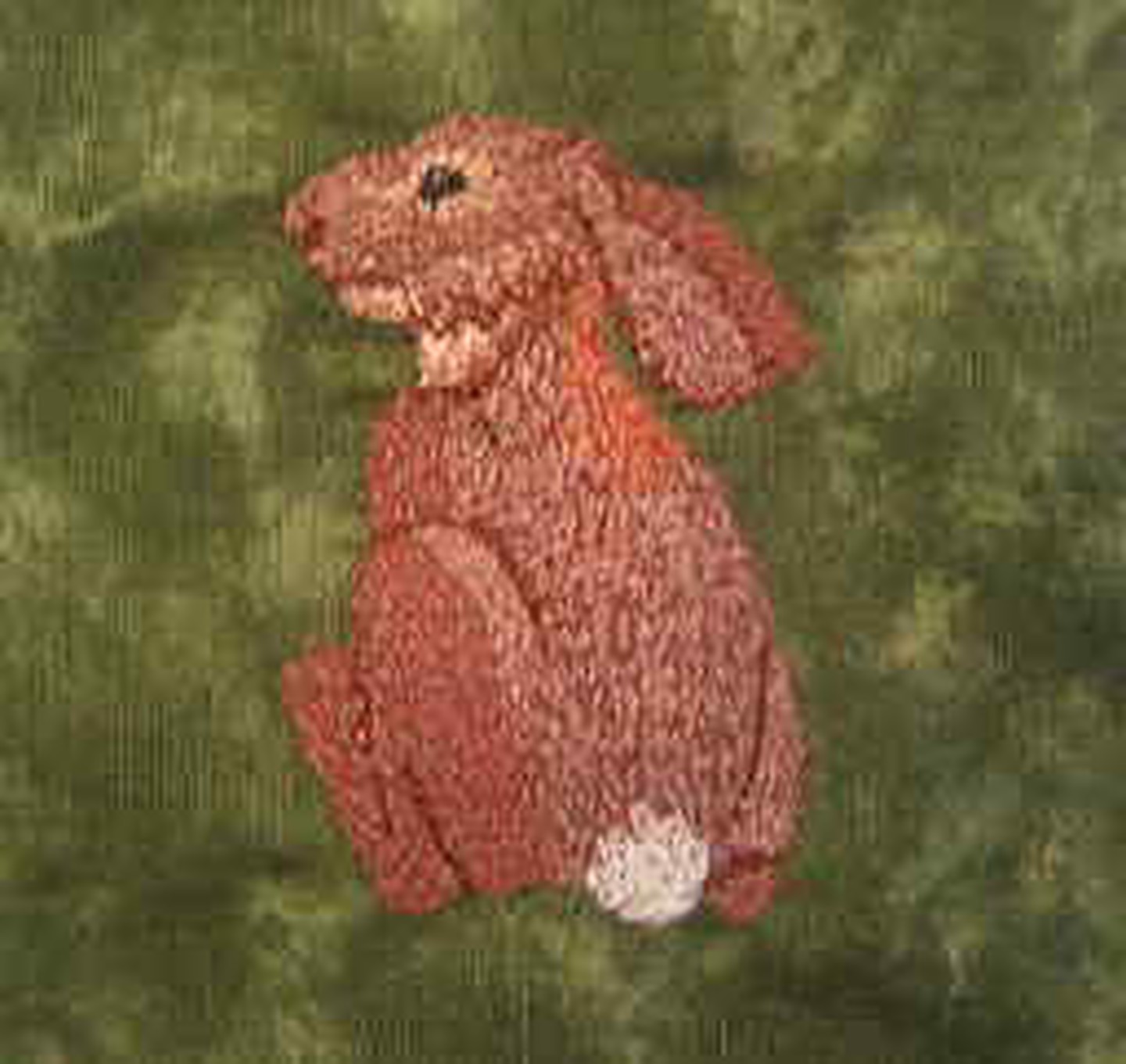 I wasn’t satisfied with the first crouching cottontail, so I tried again. 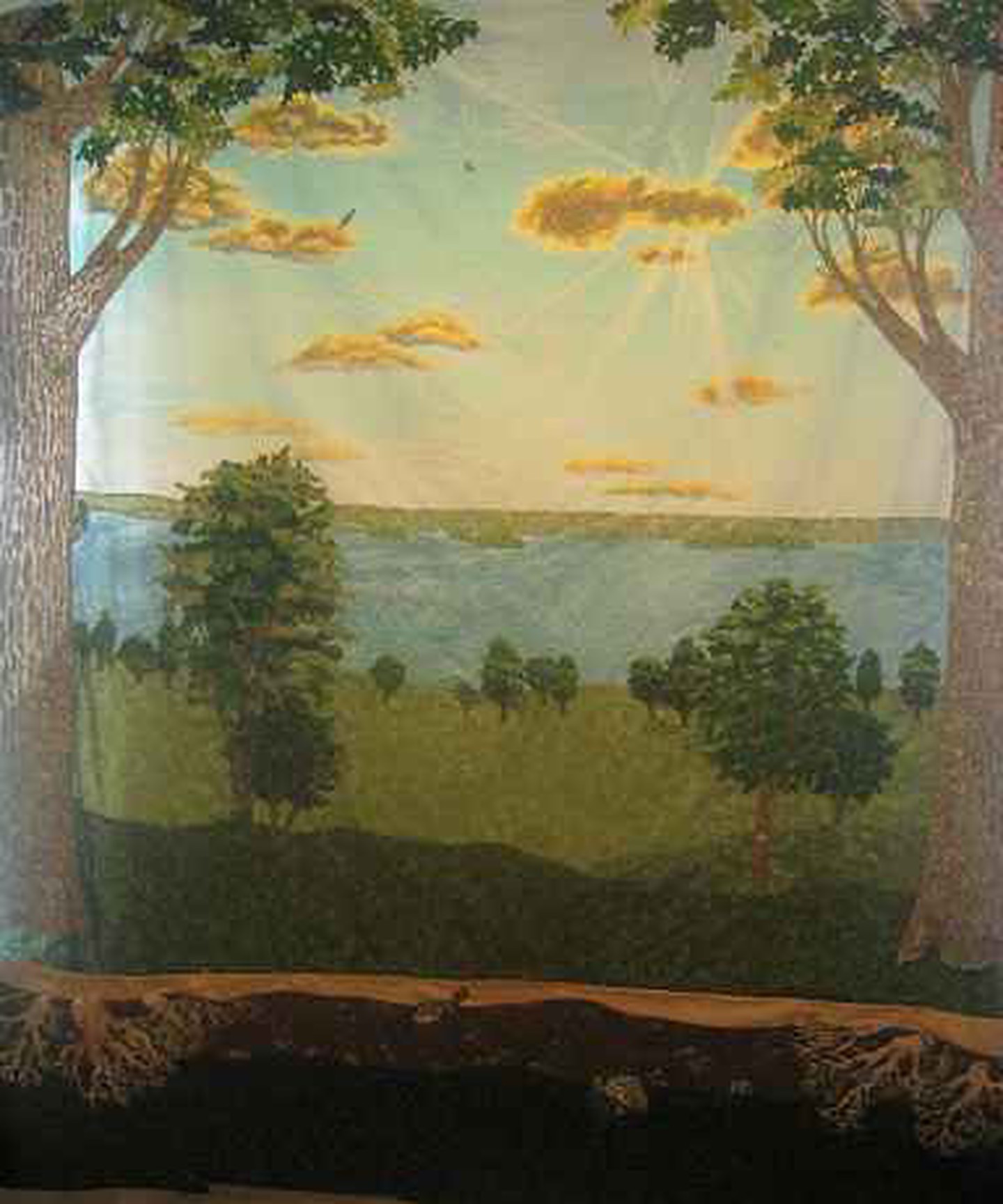 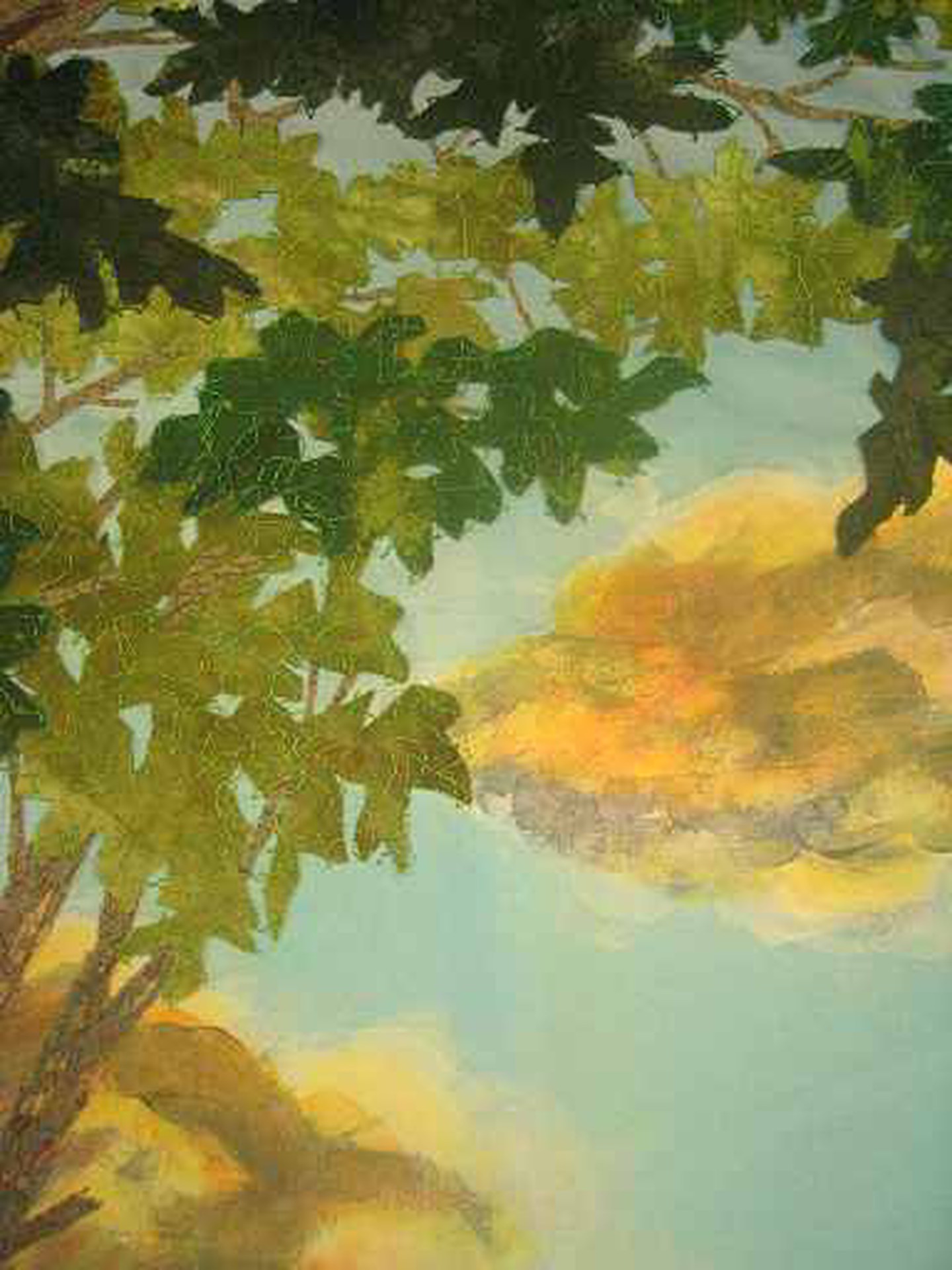 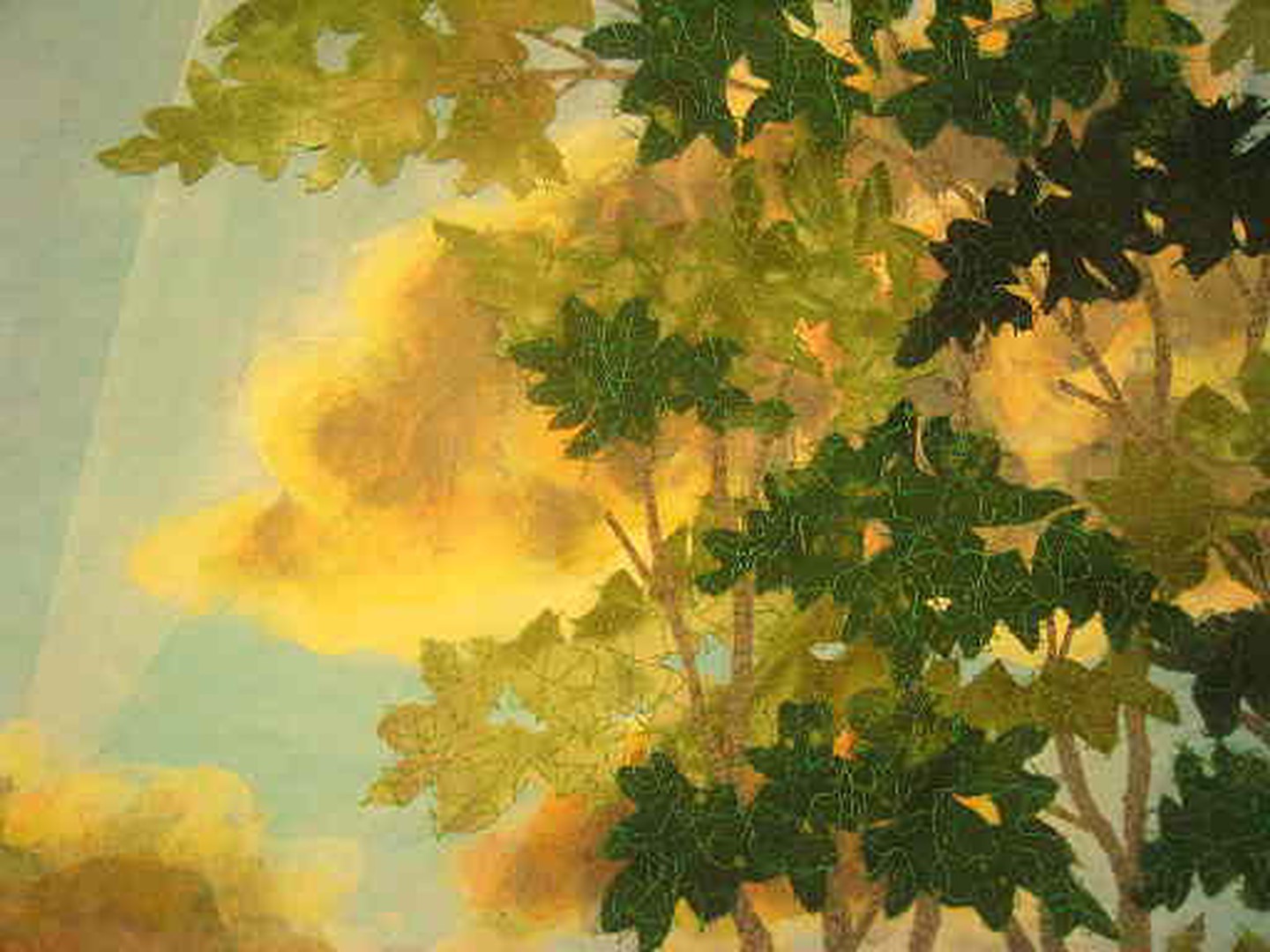 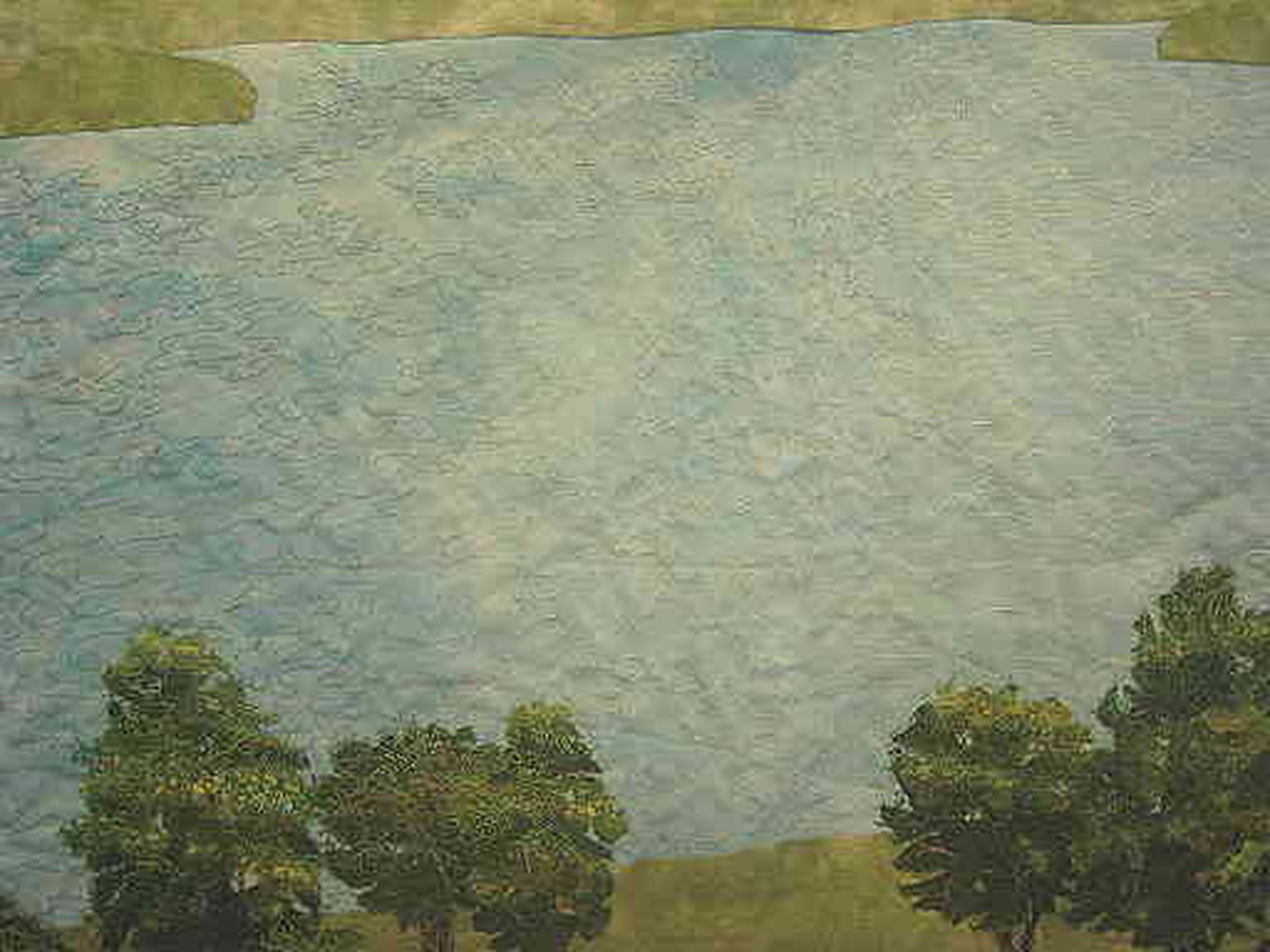 Thread sewn across water; three colors were used with the lightest below the sun. 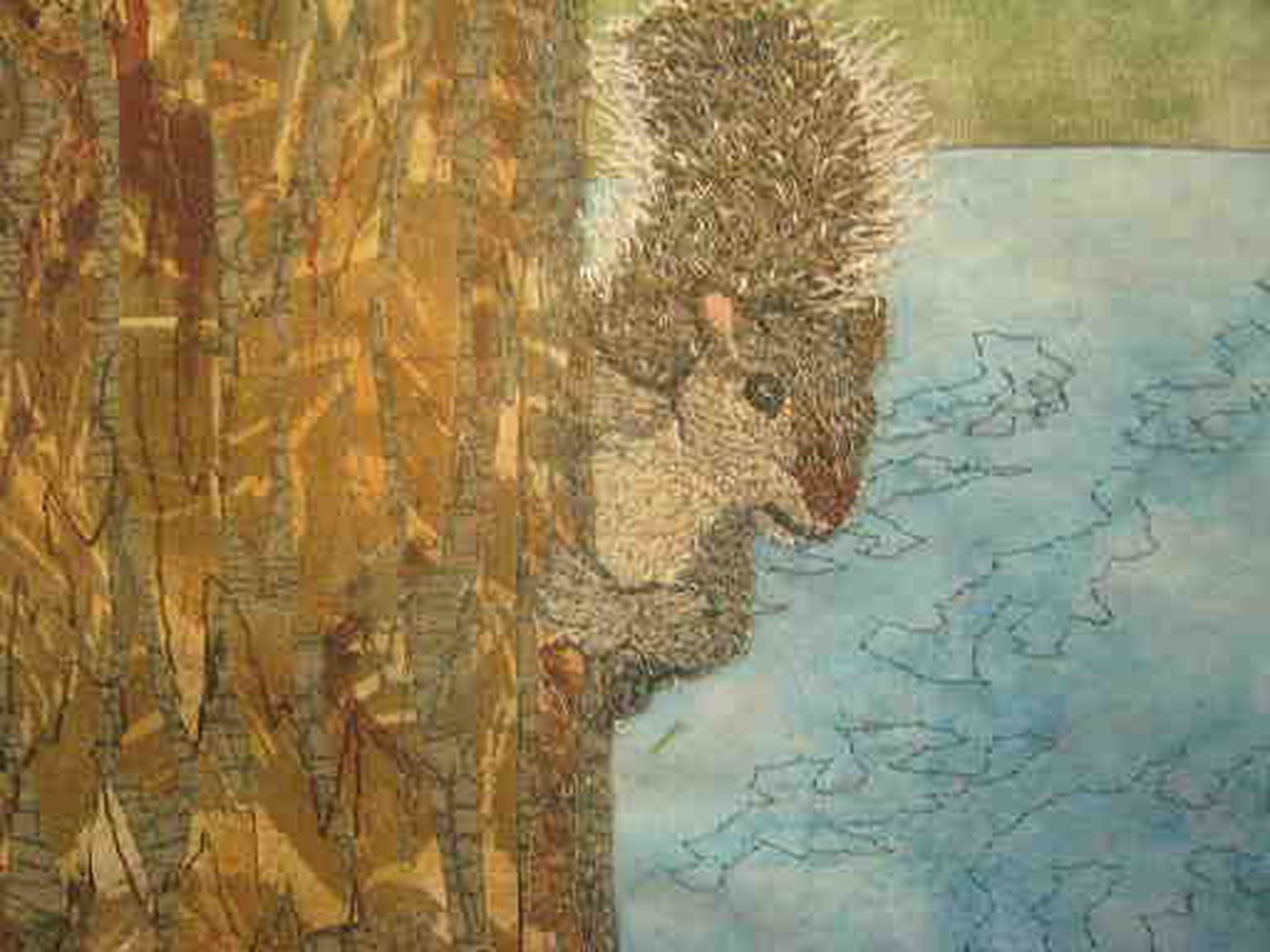 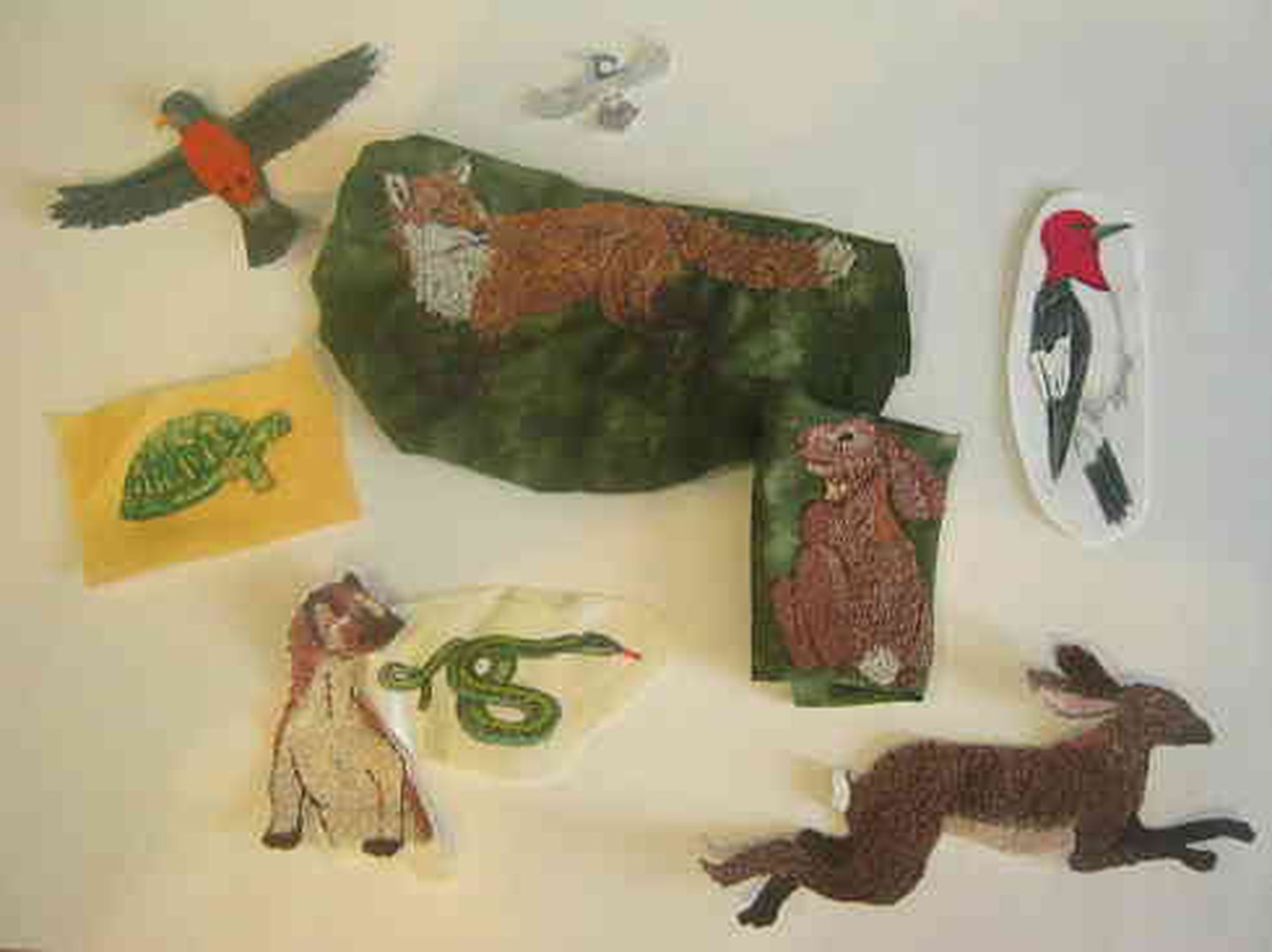 More animals are waiting to be sewn on

Most of the animals shown in the image above have been sewn in, and the flowers and prairie grasses sewn. The area nearest the lake (lighter green) has painted areas of flowers. The trees will eventually cast shadows. 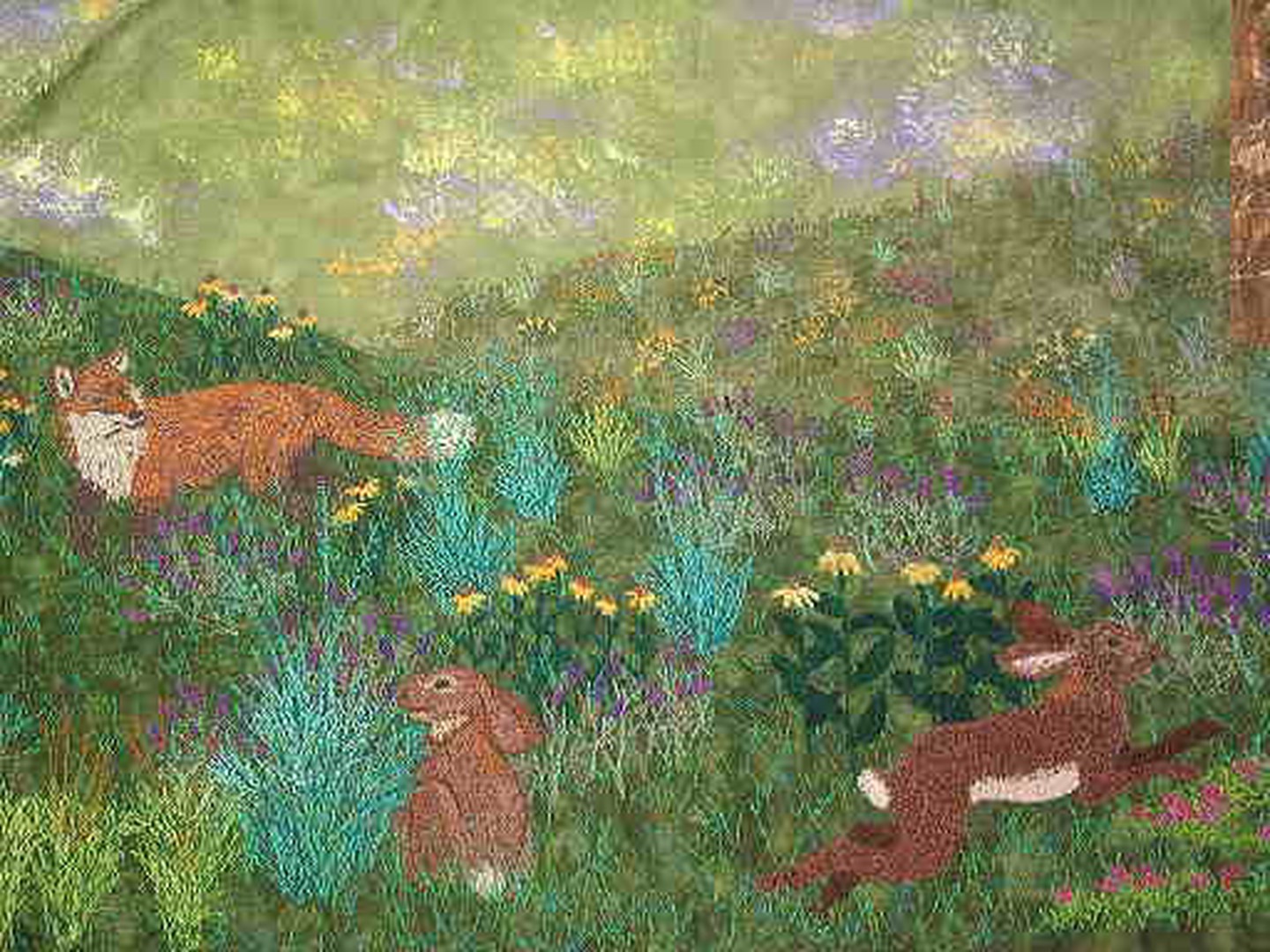 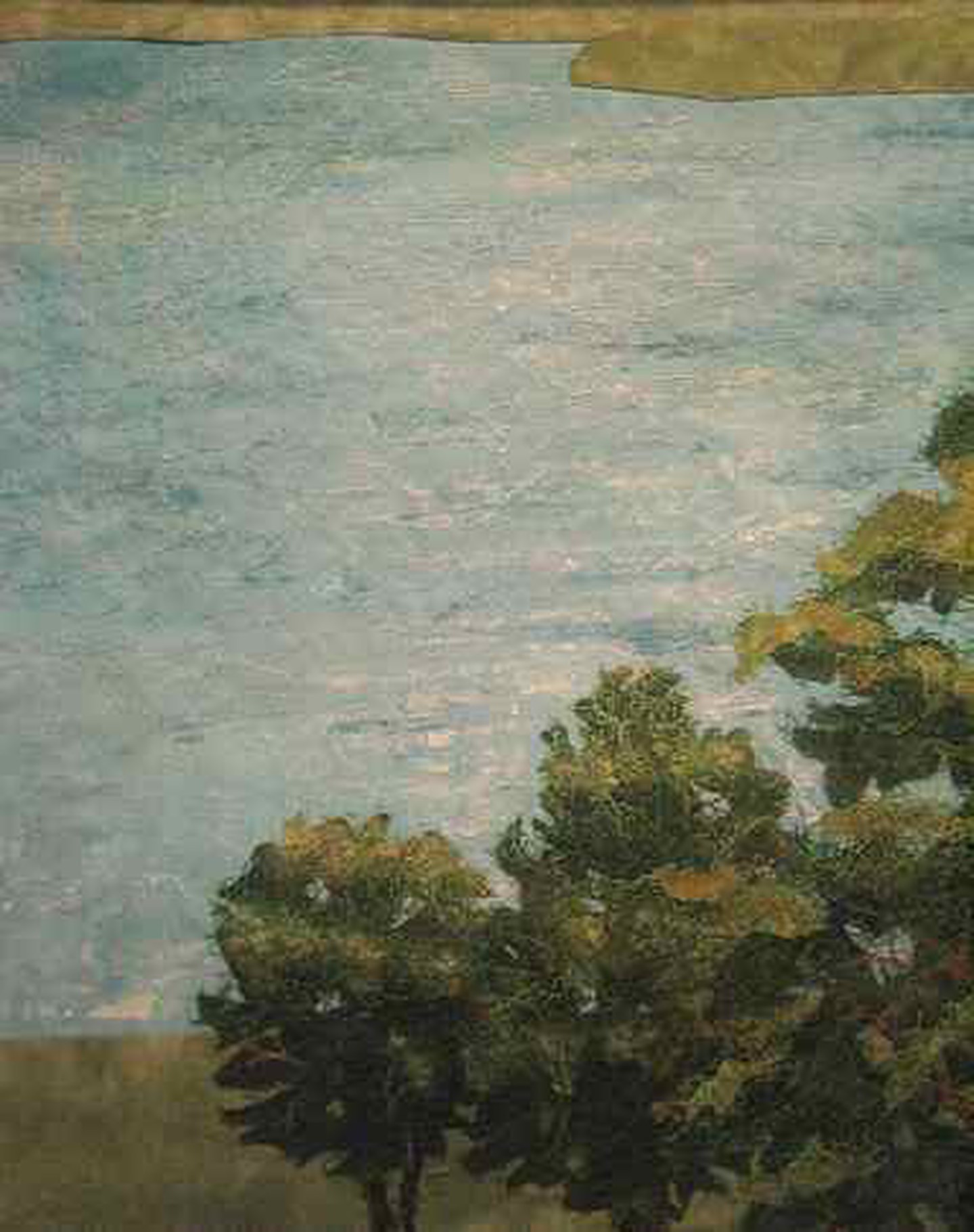 A bit more light and dark paint added to the water.

Prairie grass roots run deep. Each of the three grass species has its own kind of yarn (two of which I painted to get a good color). The flowers and shortgrass have very shallow roots right at the top of the ‘cut-away.’ Insect and crawly things are painted. 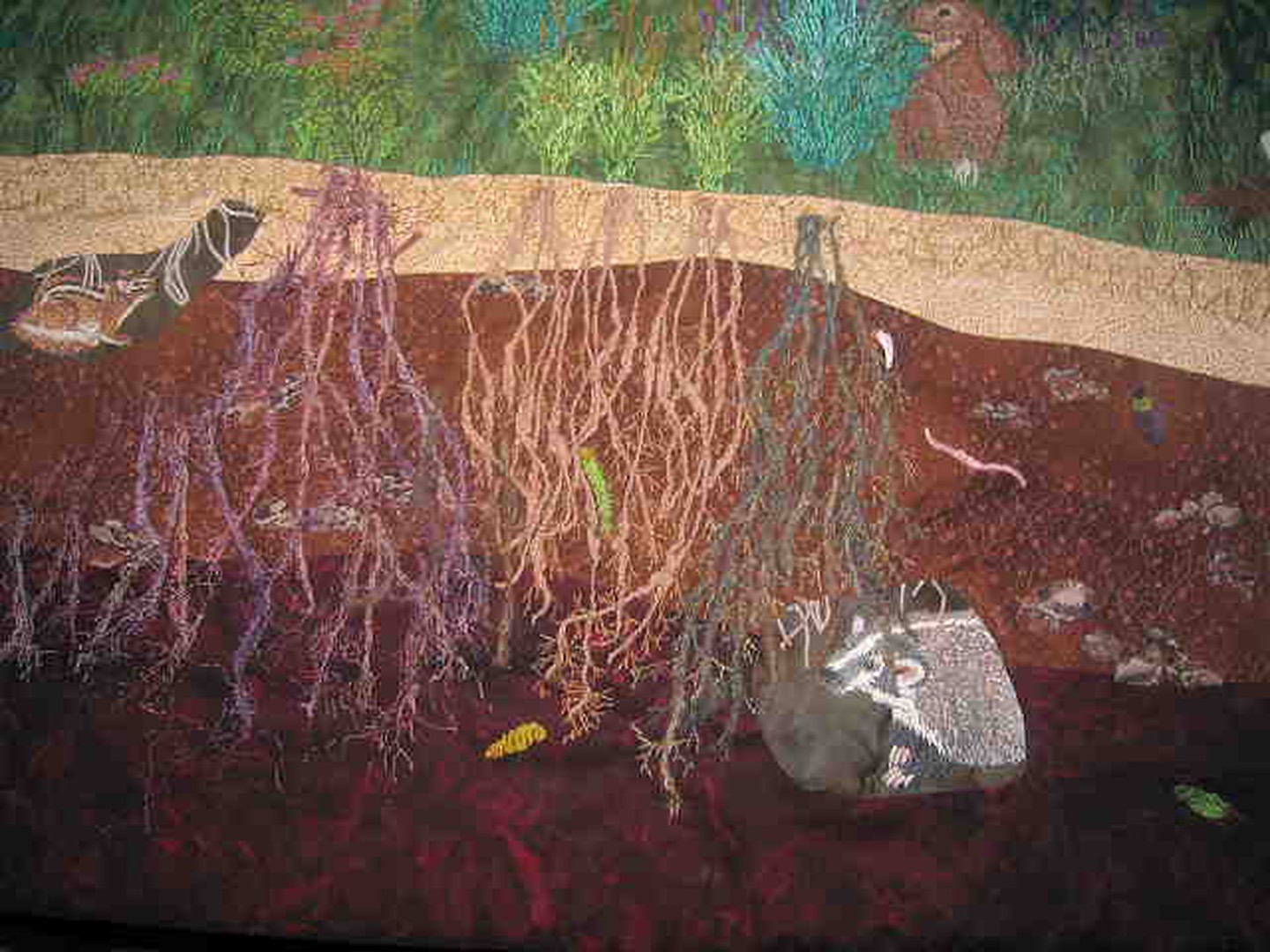 Next - tree shadows and a few more details. Then the quilting!

Shadows for the furthest trees are painted in, along with shadowed flower colors. The midground trees have black netting for subtler shadows. The quilting is finished, the lining is added - it is finished! Now to take it to the professional photographer, and ship it to the new owner. 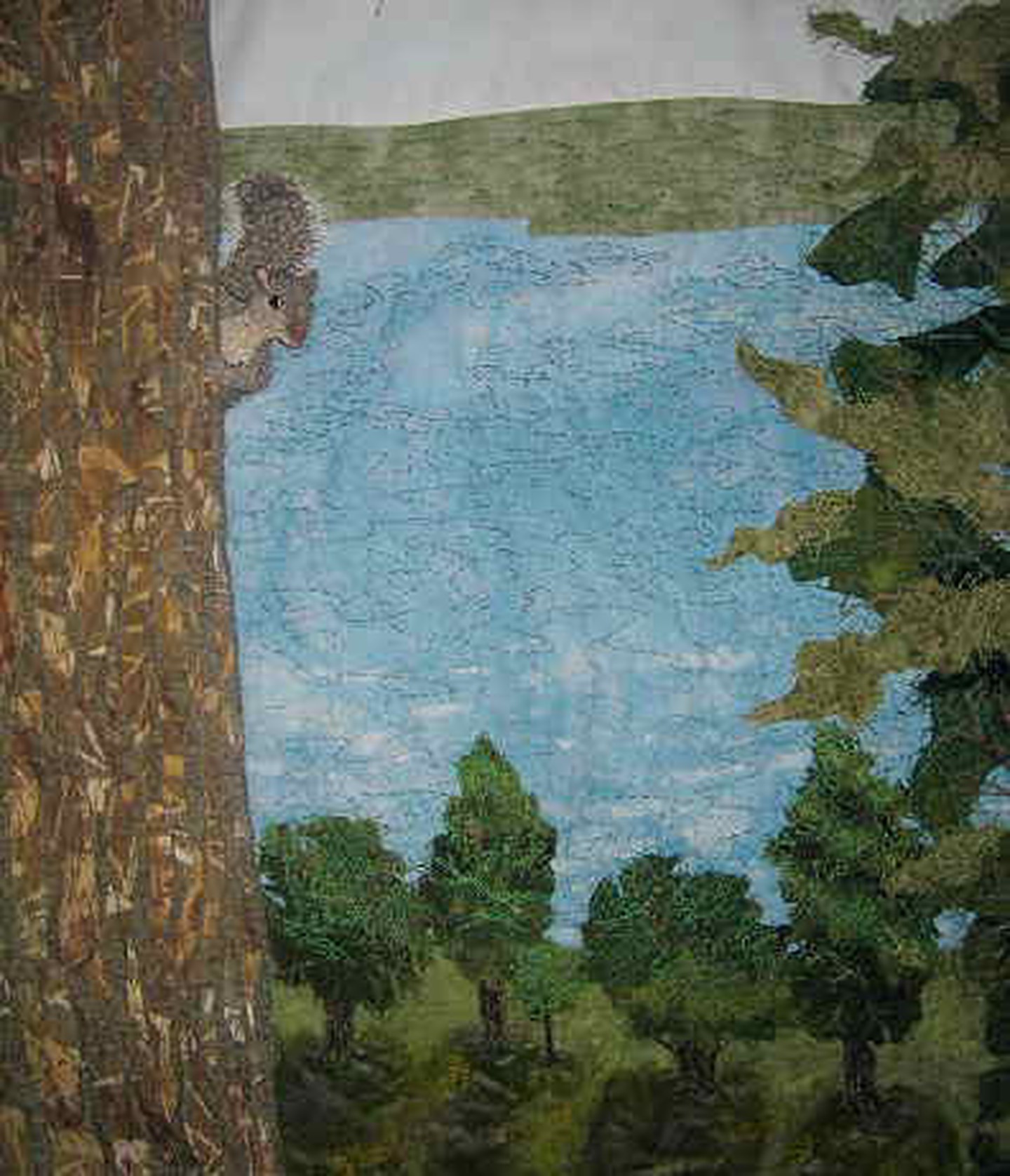 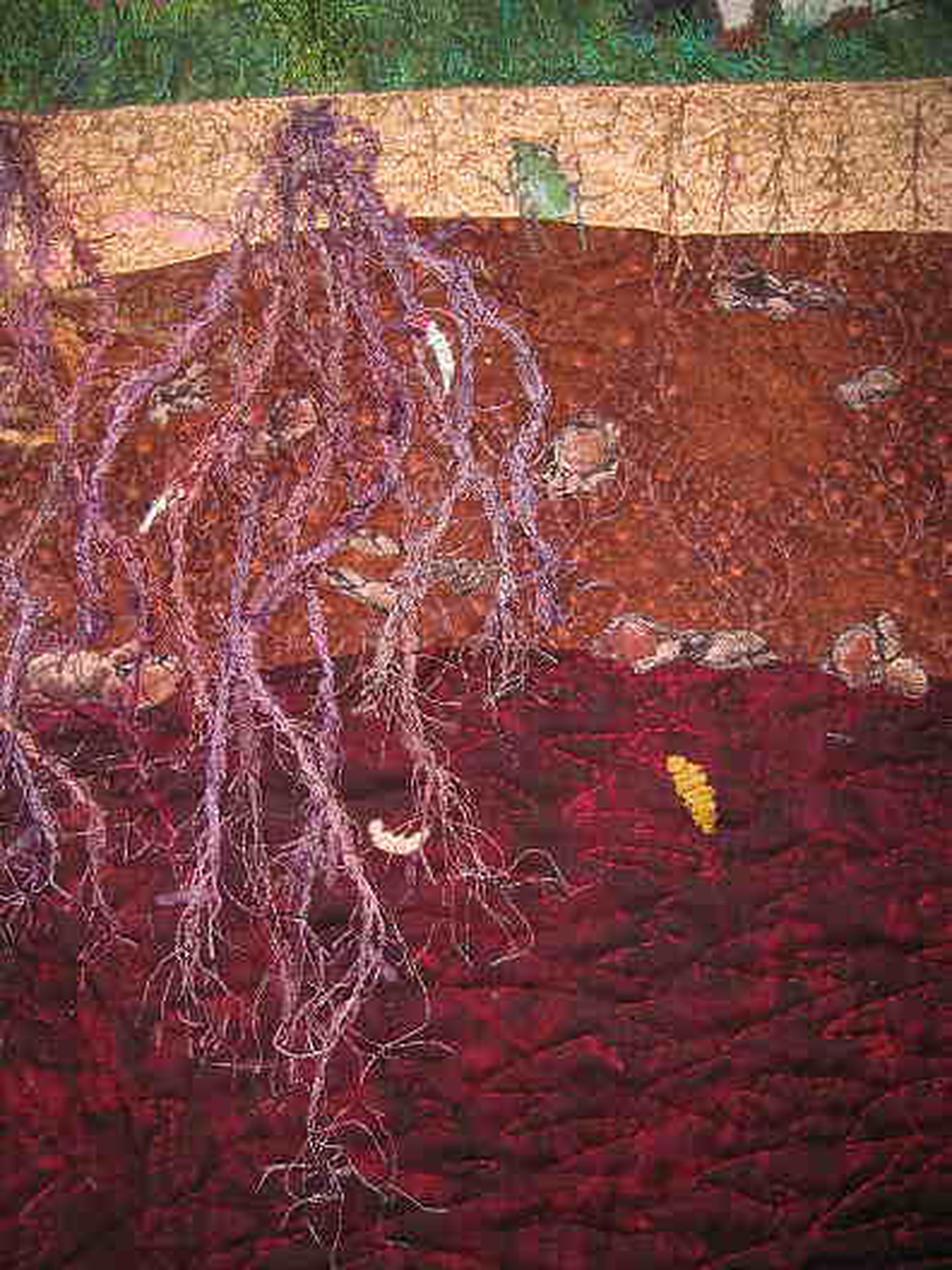